Rose, who attends Southfields Academy, wowed judges at last night’s final with her dish of cod cakes followed by chicken parma ham, with a Portuguese desert of natas de ceu.

The Young Chef competition is run by the Mayor of Wandsworth and the council’s lifelong learning team in association with borough schools. It nurtures young talent, teaches young people how to cook good healthy food to a budget, provides a chance to learn from the experts and helps young people get a foothold in the catering industry.

The finalists will now all take part in the Mayor of Wandsworth’s Young Chef of the Year 2018 Charity Dinner, which is raising money for The Wandsworth Community Safety Trust, St. John Ambulance and the Rotary Club. Students will get the chance to work with Daksha Mistry, former Master Chef finalist, on preparing dinner for the evening.

As part of the competition, the young people involved have already benefited from attending two masterclasses at Billingsgate Seafood School and top London restaurant The Brigade.

Young Chef is funded in part by the European Social Fund/Education and Skills Funding Agency Careers Cluster project Pan Out.  Pan Out has enabled this and other initiatives that have developed and supported students in Wandsworth.  For more information visit www.panout.london.

Nick Vadis said: “The standard just gets better and better each year.  I am delighted to be part of the initiative with Wandsworth and I can’t praise each of these young people enough.  We have seen some real talent developing through this competition and the finalists here today have demonstrated that they have what it takes to work in the hospitality industry.”

The Mayor of Wandsworth Leslie McDonnell said: “I hope taking part in this competition has inspired the borough’s young aspiring chefs. The dishes they created for the final were outstanding, and I’m looking forward to seeing what they come up with for the Charity Dinner.” 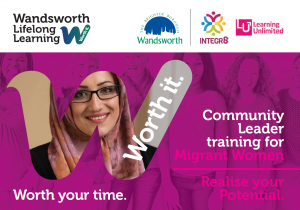 INTEGR8 – Realise your potential
Click here to see our flyer! Are you a migrant woman living in London? Would…